About School of Law 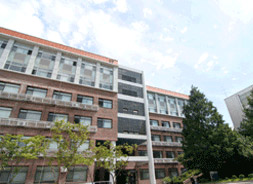 Our society is regulated and operates on the legal principles, therefore the legal system affects nearly every aspect of our society. The demand for lawyers thus lies not only in the legal field but also in the political, administrative, educational and industrial fields. In order to meet such demands, SNU School of Law trains its students for the legal profession and further related professional qualifications. The School curriculum focuses on the general legal knowledge in the areas of legal theory and practice to develop intellectual and analytical skills and practice the interpretation of law. In the past, the School was divided into two departments, the department of public law and the department of private law. However, the two departments were integrated into a single faculty in 1997 to train the students to understand diverse legal phenomena more effectively in the global environment.

Let Justice Be Done, Though The Heaven Should Fall. 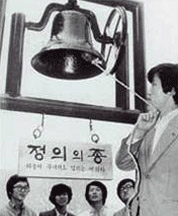 Fiat justitia, Ruat caelum" The small western bell at the back entrance of building no. 15 has historic background as a Justice Bell, though it is blotted out by the new eastern bell which was placed when the Centennial Hall of School of Law was founded. Below the small bell, very well known canonical remark is written: LET JUSTICE BE DONE, THOUGH THE HEAVEN SHOULD FALL. This word encourages the law students to learn the worth of justice and write indelibly on their hearts.

Ferdinand I (1556-1564) used it as his slogan and it became important rule to control the nation. Its original meaning was 'Let justice be done and arrogance be fail' (Es muß Gerechtigkeit geubt werden und Hochmut zu Fall kommen) to the effect that wants to accomplish justice may not consider the interests of the powerful. It emphasizes impartial application of a law after all. But 'mundus' can be translated as 'world', so it is misunderstood as justice fanaticism (Gerechtigkeitsfanatismus).

This was occasioned by Martin Luther. He explained it in the second sermon for Psalm 100 on May 10, 1535 "Es geschehe, was recht ist, und sollt die Welt drob vergehen"(Let justice be done, though the world perishes). This is a feasible preach from the a leader of the Reformation. It is similarly translated by Johann Christoph Beer: "Was recht ist, soll in meinem (=Ferdinand I.) Reich geschehen, Wann auch die Welt daruber muß zergehen"(Let justice be done in My(=Ferdinand I.) empire, though the world perishes.)

It is mentioned in the Diary 33 of Marino Sanuto (I diarii 33, Venedig 1892) for the first time. It says that the Pope Hadrianus IV refused to dismiss a suit against a murderer, a man of position, citing these words. And Locorum Communium collectanea (Johannes Manlius, Basel 1562) says that Ferdinand I, who was brought up by Hadrianus IV, chose it as his slogan to rule over his empire. And it is written in Apophthegmata (Zincgref, Straßburg 1626) 107, "Das Recht muß seinen Gang haben, und sollte die Welt daruber zugrunde gehen" (Let justice be achieved, though the world perishes.) Probably, the misconceived meaning of 'pereat mundus' became 'ruat caelum'.

Anyway, it is a pithy epigram touching to the quick to emphasize the worth of justice but has risk to be misleading. If too great emphasis is on justice, it might bring another unjust condition as the old saying teaches in the Cicero's days: "The rigor of the law is the height of oppression"(Summum jus, summa injuria). In other words, 'ruthless' law can be put in force under the name of justice.

Rudolph von Jhering proposed instead "Fiat justitia, ut floreat mundus"(Let justice be done so that the world prosper). It seems perfect phrases but omits the important part, fair and impartial application of law. But, supposing that justice is to bring prosperity after all, the law students must remember "The welfare of the people shall be the supreme law" (Salus populi suprema lex esto) likewise "Let justice be done, though the heaven fall".

"Fiat justitia et pereat mundus" original intent (fair and impartial application of law without distinction of person) or present meaning (rigor of law)- and "Fiat justitia, ruat caelum" are worthy to be written for the Justice Bell at the School of Law, only if we remember that all law is established for men's sake (Hominum causa omne ius constitutum est), not vice versa.