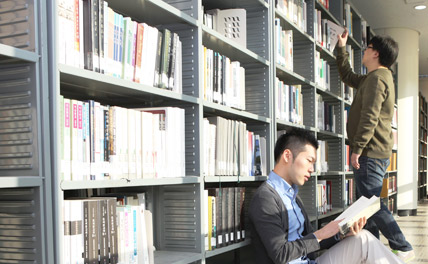 The library of Seoul National University's law school was first established in August 1946, when Seoul National University was established. Subsequently, a new library was built on Dong Seong Dong campus in June 1961, with two study rooms, one moot court and two-hundred and seventy-five seats. When the University moved to Gwanak campus in 1975, the library for the law school was also relocated. The official name of the law school library is Kuksan Law Library. The name Kuksan is the attribute for Mr. Kim Teak Soo, who made the major contribution for the establishment of the library. Construction began in October 1982, which was finished on December 3, 1983. The law school library is a stone structure of 1,246㎡ in area, with two floors and a basement. SNU School of Law has continuously made an effort to increase the volume of books and the subjects and issues covered by the books in the library. Mr. Yoon Sae Young, one of the graduates from SNU Law, kindly made a generous donation and took the initiative for the expansion of the library building and facilities. The new wings attached to the preexisting Kuksan Law Library is named Seo Am Law Building, as Seo Am is the attribute for Mr. Yoon. Seo Am Law Building, which consists of six floors and a basement, opened in 2009.

At present, SNU Law Library of Kuksan and Seo Am provides the vital space where members of the law school community make their undivided effort to research, reading and class preparation. On the ground floor of Kuksan Law Library building, a gym facility is available for both the students and the staff members of the law school. Kuksan Law Library building also houses on its second floor the Memorial Hall commemorating the history of Seoul National University School of Law, and a reading room with periodical publications and other reference books. On the third floor of Kuksan Law Library, there is a reading room holding periodical publications with eighty-six seats. In Seo Am Law Building, on the ground floor, there is a library of rare books and official SNU publications. On the second floor of Seo Am Law Building, there are a lab with computer devices for research and class and a reading room with one hundred and thirty-six seats, while on the third floors it houses books on various legal subjects and issues.

As of March 2015, SNU Law Library contains approximately 157,035 books and 471 kinds of periodical publications. Most of the books are available under the open stack system. Users may also have access to the books that are available under the closed stack system by obtaining a permit issued by the library. Various search engines to look up and obtain legal information are available, and WEB DBs, eletronic journals and electronic books are also available in the library. In particular, Kuksan Law Library was the first library that had developed a legal information database, leading the development of legal scholarship in Korea. The Library of Seoul National University School of Law, with its facilities in Kuksan Law Library and Seo Am Law Building and also the volume of books, is undoubtedly the best law library in the nation. The Library of Seoul National University School of Law continues its effort in increasing its functions and expanding the scope of its services to better serve the SNU Law community and to assume the role as the most resourceful and readily available legal information center in Asia and in the world.